This is going to be a very brisk LWOM post (what’s LWOM?).

We have to be brisk today, because– 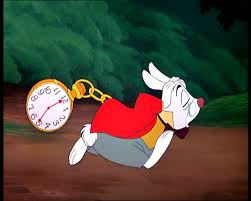 Why yes, because there’s the White Rabbit! And we must catch up with him.

“No time to talk, no time to chat, I’m late and later, and that is THAT!” shouted the White Rabbit as he jabbed and poked at his oversized pocketwatch.

“RUN!” the Rabbit yelled. And so we ran.

Into the sunset, to be precise.

On my kitchen table: Persuasion, by Jane Austen, and a jar of the best crunchy cinnamon granola in the world.

Because the White Rabbit was late, and because I myself was running late after an extended trip to the gym and forgot all about my outdoor food photoshoot and had to take some hasty pictures while the sun was sinking down past the horizon in about 0.5 seconds.

And also because I’m (hopefully) going to Disneyland in about half an hour to see the White Rabbit in person–er, in rabbit. Yes, I’m grinning as I type this.

“But that doesn’t mean that this isn’t the BEST granola in the world,” said the White Rabbit, who had suddenly appeared from nowhere at my left knee.

“Well, thank you for taking the time to–” I began, looking down…but he had already vanished again.

I turned around. My granola had vanished, too. So now you also know why it’s called what it’s called.

I don’t blame him, though. It is darn good cinnamony, crisp, and unlike-anything-you’ve-ever-made-before-and-I-rarely-ever-say-this granola. Think of picking out all the crunchy sweet granola clusters from Honey Bunches of Oats…only better.

And now, if you’ll excuse me, I have a White Rabbit to catch in Anaheim 😉

This post is part of the Lit, Wit, and an Oven Mitt (LWOM) series here at Wallflour Girl, where Ala takes a popular or classic literary character and uses him/her/it to tell a story about her recipes. Ala is an English literature graduate student with a strong interest in children’s literature, Victorian lit, and everything in between, beyond, bubbly, or burgundy. Ala does not own the rights to any of these characters or original literary texts, although she does own a really cute Winnie-the-Pooh balloon-shaped stuffed-animal. This series is intended to offer you a glimpse into her world through our shared love for food. Please let Ala know what you think of these stories–she’d love to hear what you think!

Vanishing Granola (or the BEST Granola You Will Ever Make–Honey Bunches CopyBETTER Recipe)
Adapted from Getting Through the Day
Ingredients: